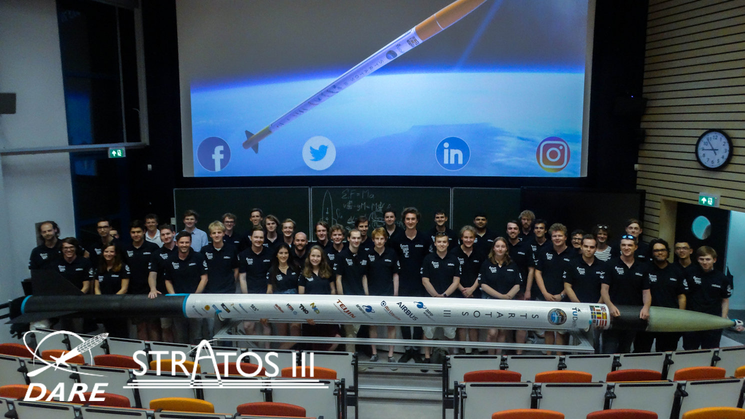 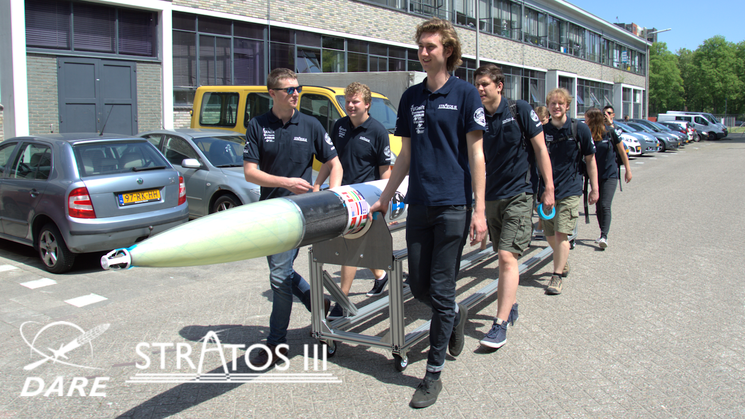 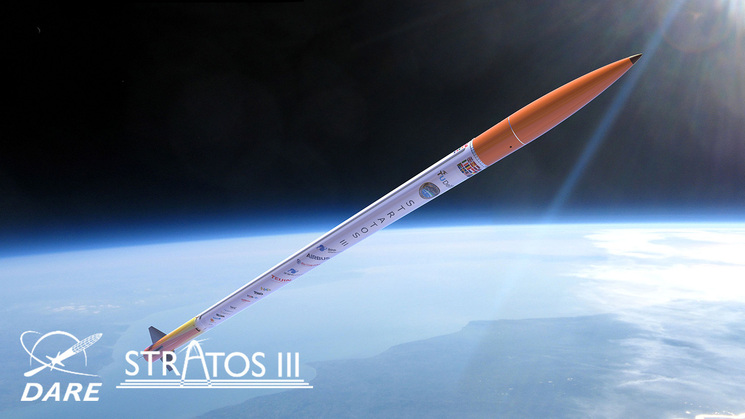 We are a group of ambitious students who share an intense passion for rocket design. Proudly we present our new rocket Stratos III. Now we are ready to launch! This is where we need you! Reach new heights with us to get back the European altitude record!

The goal of our group Delft Aerospace Rocket Engineering (DARE) is to continuously push the boundaries of student rocketry. We are striving to be the first student organization to reach space. The Stratos II+ rocket broke the European altitude record in October 2015, by reaching an altitude of 21.5 km.In the meantime, the record has been broken by several teams, including HyEnD from Stuttgart. We are eager to get the record back in Dutch hands again, which has led us to develop Stratos III. It contains several advanced technologies, including a 4.7 meter composite oxidizer tank and an advanced parachute deployment mechanism.

To launch the rocket, we need a large amount of fuel and oxidizer (the oxygen supply to burn the fuel). In fact, 60% of our rocket consists of the tank for the oxidizer. We need 18 tanks still. For this we need your help! Together we can take back the record!

We have the opportunity to launch the rocket from the El Arenosillo test center in Spain. This will take place on July 16th already! Donate now to help us make our launch possible!

At this time, most of the rocket has been designed and built (though some small amount of work is still ongoing). You might wonder why we are asking for donations at such a late stage in the process. This is because launching a rocket is more than just building a rocket. A lot of work will be done by INTA (the Spanish space agency) and us to ensure that the launch can happen safely and successfully. This entire process is called the launch campaign.

At the beginning of July, we will transport all of the components, plus spares when possible, to the launch site. A core team will travel to Spain as well to start setting things up. A few weeks later the rest of the launch campaign team will come, and the final preparations will be made for launch. Before we can launch, a large area of hundreds of square kilometers will need to be cleared from air and sea traffic. If the weather is within our parameters and the rocket is not giving any issues, this means we can proceed with the launch.

Since it is not certain this will go right the first try, we actually have several attempts, spread out over two weeks, in which we could launch. This is called the launch window. Having a launch window of two weeks means that we do not need to worry as much about the weather, or technical issues, since we can solve them, and then try again. If we are not able to launch by the end of the launch window, we will have to return to Delft without launching our rocket.

The Stratos III team is a large interdisciplinary and international team. We have about 70 members, from many faculties of the TU Delft from all over the world. We are largely split into five teams. Propulsion, simulation, electronics, structures and recovery. Each of these teams has about 10-20 members in it.

Ever since I was young, I had a passion for rocketry and space, already in high school I began working on rockets. I’m currently the Chief Propulsion of Project Stratos and my biggest goal right now simply put is to break the altitude record!

Propulsion is mainly focused on the design and testing of the engine. Aside from that, the propulsion team helps with the design of the engine bay too. Simulation is in charge of all the modelling and simulations that need to be done. We need to be able to show that we will stay within the cleared area for safety reasons, and the simulations also help us judge our performance before we launch. The PCB’s are custom designed by the electronics team. Structures in in charge of all the structures of the rocket. This includes the nosecone, oxidizer tank, and many other components. The recovery team is in charge of making sure the nosecone and all of the electronics, payload and data inside can return safely.

DARE is fascinating because it is a breeding spot for knowledge, ingenuity and entrepreneurship. I cannot wait to see how all our work comes together at the launch campaign of Stratos III.

Aside from these main teams we also have several subteams to solve problems as they come up. This allows for a lot of interaction between members. This keeps everybody motivated, and allows everybody’s expertise to be used to the best of their ability.

At a towering 8.2 meters tall, Stratos III is larger than any rocket DARE has built before. Weighing only about 105 kg when empty, and 330 kg when full, it is only slightly heavier than Stratos II when empty, even though it is much larger. The diameter of the rocket is 28 cm.

At the top of the rocket is the nosecone. This houses the flight computer and the payload. Communication with the ground also happens from here. Inside the nosecone is essentially the control center of the rocket.

Right below the nosecone is the recovery bay. This system has as a job to make sure the nosecone, and with it the payload, electronics and data that could not be transmitted inside, returns to Earth safely. When the rocket reaches the highest point in its flight, also known as apogee, the recovery bay and nosecone separate from the rest of the rocket and come back under parachute. Once they have landed in the ocean, our recovery boat will track it down and recover the top part of the rocket.

Below the recovery bay is the oxidizer tank. At 4.7 meters long, this is the largest component of the rocket. It houses the oxidizer, the liquid propellant for our engine. The fuel is stored in solid form in the engine itself. The tank is made out of carbon fiber, allowing it to be very light, yet strong enough to contain the 60 bar of pressure required for flight.

The engine bay sits between the oxidizer tank and the engine. It houses many of the systems to control the engine, including the main valve. It also houses the flight termination system. This system allows us to incapacitate the rocket in case something goes wrong during the launch that could pose a safety risk. To do this, there is an additional dedicated receiver in the engine bay. The engine bay is one of the most crowded parts of the rocket, as there are very many systems that need to share the same small space.

At the bottom of the rocket is the actual engine, the DHX-400 Nimbus. At a peak thrust during testing of 25.3 kN, and a total impulse of 367 kNs, this is the most powerful student-built hybrid rocket engine in the world at the time of firing. The engine is powerful enough to lift an elephant. Using a fuel mixture of sorbitol, paraffin and aluminum powder, the engine is similar in structure to the engine of Stratos II, Aurora. With an average thrust of about 15 kN during the main part of the burn. Considering the low weight of the rocket, this means the rocket takes off really quickly, which will be very clear during the livestream.

€12 Donate Stratosphere - At this level, you're supporting us as much as the stratosphere is high in kilometers. This is the layer of the atmosphere our rocket is named after. We appreciate all donations, no matter the amount. You will get a thank-you email, and if desired, you can sign up to our (special) newsletter. 13 donors €33 Donate Current European altitude record for students - At this level, you made it past the European altitude record for students which is currently set at 32km. That’s what we are attempting to do with the launch of Stratos III! As a reward, we will put your name on a chip which we will put on our rocket. You will also get exclusive footage from the launch campaign, which is not available in any other way. 11 donors €50 Donate Mesosphere - You've reached our goal for the launch! You will get your name in the credits on the livestream, as well as all of the rewards in the lower tiers. 16 donors €100 Donate Space! - At 100 euros (or km) you've made it to the Karman line, the official edge to space. At this level we will give you a shoutout during the livestream of the launch on the 16th of July! 9 donors €440 Donate Orbit - At 440 km, it is possible to orbit earth. 440 euro gets us 2 whole bottles of oxidizer! With such tremendous support, we would gladly show you around the workshop where we actually built most of the rocket. 3 donors €1.000 Donate Exosphere - At this level, you made it to the exosphere which is the last Earth atmosphere layer - above it there's just outer space. This amount will also be enough to finance almost half the oxidiser we need for one launch attempt! As a special thanks, you will be invited to the parachute tests in the wind tunnel.

Student team wants to go into space (only in Dutch)